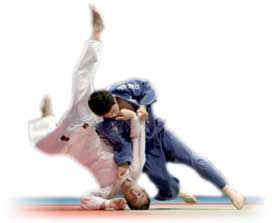 Judo was developed in Japan by Dr Jigoro Kano towards the end of the 19th century and has evolved from being a martial art into one of the world’s most popular sports. Since its inclusion in the 1964 Olympic Games Judo has progressed rapidly and is without doubt the worlds most popular combat sport. Judo is however much more than a sport, it is also seen to be effective as an educational system in both physical and moral spheres.

Judo training is an ideal form of physical exercise and it serves as a great cardiovascular workout, which improves stamina, general health and overall fitness. Physical strength is also improved as a direct result of trying to control and dictate the movement of the opponent and as well as enhanced power; a Judo player will also improve their flexibility. For the same reasons the balance and posture of a player will also be enhanced. Physical co-ordination can be seen to develop dramatically from participation in Judo and reflexes are also improved together with mental reaction time.

Looking for Judo in Lincoln? Get in touch using the contact details below: